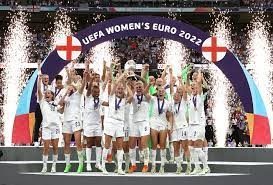 After an amazing summer tournament during which we witnessed some incredible football, our England Women’s football team triumphed over their number one rivals, Germany, with a 2-1 win to become the champions of Europe 2022!

Over the last few weeks, we have shown our support to the team by dressing in sporting/red, white and blue attire, whilst enjoying the success we had always hoped for.  Although we are now on our summer break, we know that the majority of our community would have been sitting at home at the same time watching the final, cheering on every tackle, pass, and shot.

This win is clearly inspirational in many ways.  The competition has shown the entire world that girls and women can play football to such an outstanding level, whilst the England win has demonstrated to our young girls that they too could be footballing icons like our new heroes Beth Mead, Ellen White, Mary Earps and Lucy Bronze.  Additionally, we can all learn from the level of hard work and dedication that this team of individuals have had to overcome.  In a time when the women’s game was not professional or taken seriously, everyone involved would have to make major sacrifices in their lives to achieve the high standards necessary – this is something that those in the men’s game cannot fully appreciate.

What also has to be admired is the tenacity and will to win which meant the team was able to overcome a German team whose record has been outstanding.  England had only beaten Germany twice in 27 previous games with 21 losses.  The mental strength that has had to match the years of training cannot be underestimated.

This win is a historic moment and one which must support our women’s sports in the years to come.  Even though our school community have not been able to come together to enjoy the celebrations, I am sure that many of us were singing at the same time when the trophy was held aloft …